Today (May 12th) marks the 50th anniversary of the first Rites of Spring on the campus of Illinois State University.  From 1972 to 1977 the music festival became the most anticipated day on the campus calendar.
The event was originally intended as a way for students to relax and enjoy some live music on the Quad before final exams.  The free concert was meant strictly for the ISU community however that proved difficult to enforce.  In a matter of a few years, Rites became the "festival of the Midwest" much to the dismay of university administration and Town of Normal officials.
Open drug and alcohol use on campus during the event (Normal was dry until 1973) along with minor injuries, excessive garbage and damage to the Quad were just a few of the reoccurring problems associated with the festival.  Efforts to limit the attendance by non-students mostly failed.  By the last year of the festival, the crowd totaled somewhere between 18,000 - 25,000 with a large portion coming from outside the university community.
The music of Rites varied from year to year but often included well known national acts.  Below is a list of the performers with a brief synopsis of events for each year.
Rites of Spring I : Friday May 12, 1972 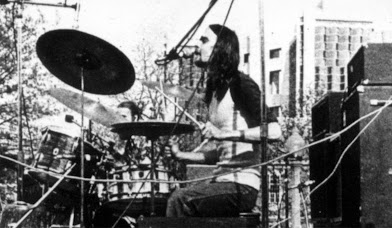 Attendance was between 2,000-3,000.  This would be the longest scheduled Rites festival with music set from noon until midnight with the last hour and half being open to any band "wishing to jam." The event was mostly without incident.  As one attendee told the student newspaper, "It's the greatest thing that has ever happened at ISU."
Rites of Spring II : Saturday May 19, 1973 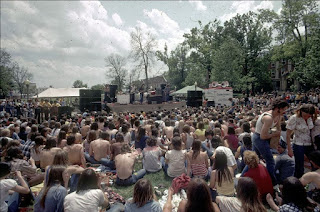 The day's events lasted from noon until 10:30 pm with an estimated 7,500-10,000 people gathering on the south end of the Quad.  The concert was marred by poor sound quality however which was blamed on high winds.  Another complaint was there were too many "bar bands" and not enough big-name acts this year.  There was one drug overdose and a few broken windows on campus but no arrests despite a blatant disregard for drug and alcohol bans.  One of the organizers told the Vidette, "People were a little bit too obvious about things.  For instance, people bringing out bongs and caseloads of beer."
Rites of Spring III : Friday May 3, 1974 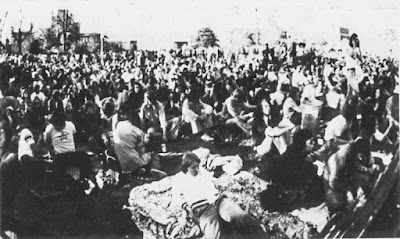 In an attempt to limit the crowd size, organizers did not officially release the date of the festival until the day of.  Still the crowd totaled around 10,000 people.  The concert was originally scheduled from 3 to 10:30 pm but due to delays with equipment it didn't end up starting until 4 pm and lasted until midnight.  As in the previous year, security on campus was managed by student volunteers.  The ISU police did not patrol the Quad but made it clear they were prepared to make arrests if necessary once attendees left campus.  Despite all the built up, the event was fairly peaceful.  The only exception being some minor vandalism and tire-slashing of vehicles in a nearby parking lot.
Rites of Spring IV : Monday May 5, 1975 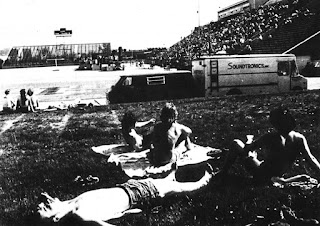 In the months prior to the festival, dozens of ISU students were arrested in drug raids conducted by the Multi-County Narcotics Enforcement Group (MEG).  Concerned that Rites was contributing to the local drug problem, university officials decided to move the concert to Hancock Stadium where the crowd could be better controlled, especially the use of alcohol and marijuana.  The official announcement of where and when it would take place was once again withheld to the last minute however the Vidette had provided unconfirmed details several days prior.
The official Rites ran from 1 pm to about 6:30 pm with Golden Earring ending their set early due to "inefficiencies in their soundsystem."  The entire event was emceed by comedian Jimmy Whig with the crowd fluctuating between 1,000 - 4,000 people throughout the afternoon.  The director of the event was quoted in the Vidette as saying, "You could bring your mom, your kids and your dad to this one."

Meanwhile, back on the Quad, an alternative and unsanctioned Rites known as "People's Park" was also taking place.  A crowd first started to form at the south campus park by noon.   As the crowd grew it eventually moved to the amphitheatre at the south end of the Quad.  University officials however refused to provide the group with electricity so they rented generators and proceeded to hold a concert of their own.  According to the Post-Amerikan, "Music was provided by just about anyone who decided to walk onto the stage.  Most of the people who played together hadn't played together before.  They sounded great." 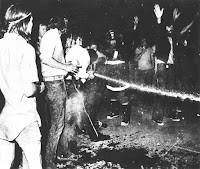 School officials made several attempts to get the crowd to disperse, repeatedly informing them that they were in violation of university regulations.  The size of the gathering however meant that police action was not an option.  By 7:30, the crowd had grown to about 3,000 people.   As darkness fell, no electricity meant no lighting on the Quad.  The crowd's solution was a bonfire which resulted in Normal firefighters arriving on the scene, spraying the fire, the stage and onlookers indiscriminately.  A brief melee ensued, bottles were thrown.  The firemen and their police escort soon retreated.  According to the Post-Amerikan the music on the Quad lasted until about one in the morning.
Rites of Spring V : Friday April 30, 1976 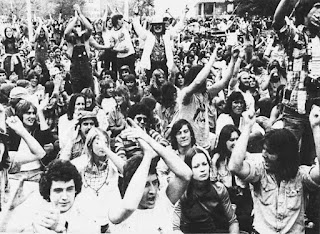 After the mistakes of the previous year, it was decided that the event would return to the Quad for 1976 however organizers conceived of a new plan to limit attendance from outside the ISU community.

For the first time, admission to the Quad was by button only with each student receiving up to four buttons in the days leading up the festival.    In previous years ROS buttons were produced mainly as a souvenir however this year they were your ticket in.  The festivities, which ran from 3:45- 11:30 pm, were deemed a great success by organizers with few problems reported.  At peak periods, the crowd reportedly swelled to about 10,000 people although some estimates were as high as 18,000.
Rites of Spring VI : Saturday, April 30, 1977 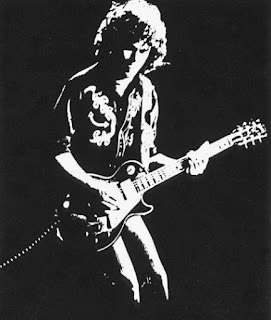 Unlike previous years, the details of the festival were announced a few weeks in advance with the lineup announced five days before the event.  Buttons were once again given to students as their only way into the event.  It was reported that 33,000 buttons were distributed.  The theme for this year's event was "Safety and Ecology."

The event was scheduled to begin at 3 pm on Saturday however people started camping out as early as Friday evening.   The crowd would grow to be the biggest of all the Rites with estimates being between 18,000-25,000 people.  With the large crowd came problems.  Due to understaffed security, large groups of people without buttons were allowed on the Quad.  There were multiple arrests made off campus throughout the day with local police receiving more than 85 noise and behavior complaints.
The biggest problem of all however was the estimated 200 cubic meters of garbage and broken glass left on the Quad.  The situation was made worse when heavy trucks used to move equipment crushed the glass and cans into the ground.  It took days for the garbage to be picked up with the Office of Enviormental Health and Safety declaring the Quad a health and safety hazard. 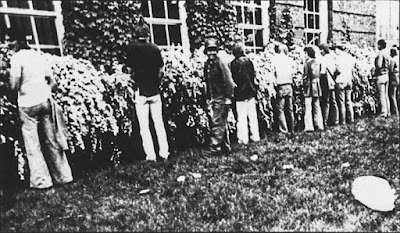 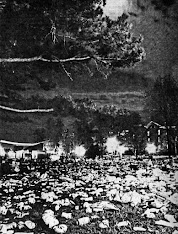 ____
After the events of 1977 it was quickly decided by university officials that there could not be another Rites of Spring.  Newly-hired University President Lloyd Watkins officially cancelled the event on July 25th while most of the students were away for the summer.  Watkins, only ten days in the office, never attended a Rites and in fact knew nothing about it when he took the job.  He provided the following reasons for his decision:
Students of course strongly protested the decision when they returned to campus.  Particularly upset by the fact that students were not consulted, a new political party, Rites of Spring Party (ROSP), formed on campus that fall with a platform of shared governance.  The party ran a slate of 13 candidates in the Student Association elections that year but failed to win a single seat in the Assembly. 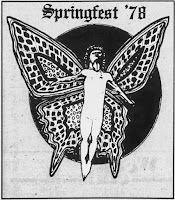 In 1978, as an alternative to Rites, the university came up with Springfest.  Rather than a day-long concert on the Quad, Springfest was a week of events that included carnival rides and free movies with local jazz and folk acts (including a young Suzy Bogguss) performing on the Quad in the afternoons.  All of the big-name concerts were moved indoors and spread across multiple evenings:  Stanley Turrentine in the Union Ballroom, the Bar-Kays in the Union Auditorium and the Grateful Dead at Horton Fieldhouse.
at May 12, 2022 1 comment:
Email ThisBlogThis!Share to TwitterShare to FacebookShare to Pinterest 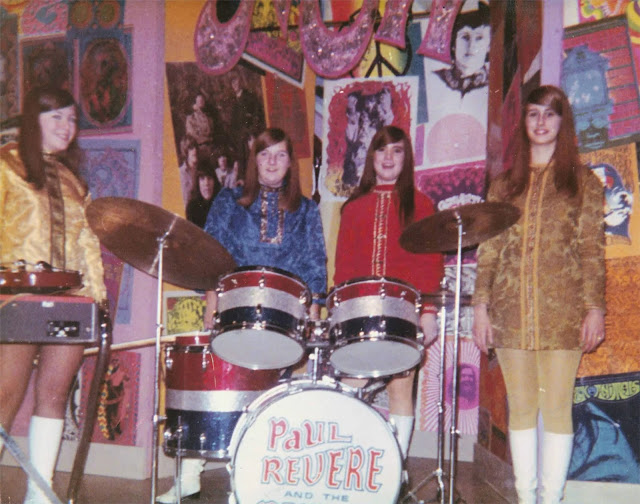 Original band members Kathy Talkin and Nellie Hastings relive the journey of the Mod 4 at the Rogers Park/West Ridge Historical Society.   You can now watch the whole presentation below.
For more about the Mod 4 see our article from 2020.
at May 11, 2022 No comments:
Email ThisBlogThis!Share to TwitterShare to FacebookShare to Pinterest 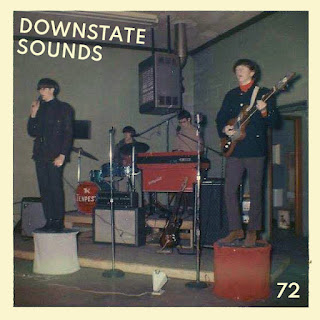