The Benz Record Company of Champaign, Illinois released primarily square dance singles (78s & 45s) starting in the late 1950's and into the early 1960's.  The label was owned in part by caller Ben Baldwin Jr. and appears to have been a subsidiary of the Marex-Benz Co., a mail-order square dance / western supply store based in Champaign (506½ W. Columbia).  Another address associated with both the label and the supply store:  Box 371, Champaign, Illinois. 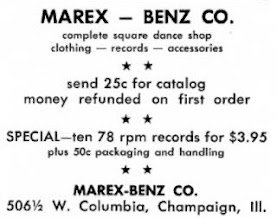 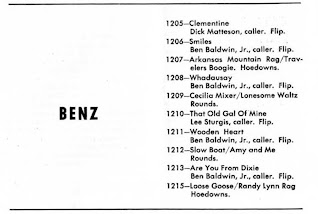