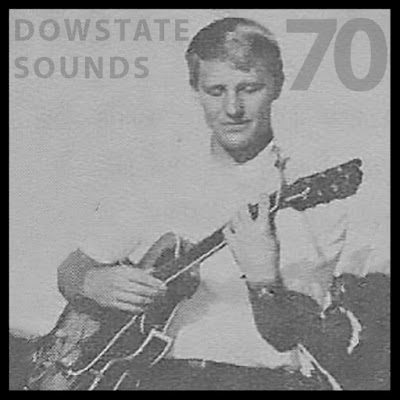 at February 24, 2022 No comments:
Email ThisBlogThis!Share to TwitterShare to FacebookShare to Pinterest
Labels: WESN Shows

In early 1971 composer and guitarist David Luck organized a group of talented musicians from the Champaign-Urbana folk and jazz scenes to record a selection of his original compositions.  Six tracks were completed in just two days at the now legendary Golden Voice Recording Co in South Pekin.
Joining the group in the studio was a young Dan Fogelberg who would lend his distinctive voice to several of Luck’s tunes. Perhaps most notably is the ballad “Sweet Lady James,” which deals with the unlikely subject of homophobia. Not your standard fare for 1971.
At the time, Luck was working as an assistant film editor at the University of Illinois’ Motion Picture Production Center alongside sound engineer Tom Holman.  (Holman would go on to develop Lucasfilm's THX system as well as create the world's first 10.2 sound system).
The music recorded at Golden Voice was intended to be used in a film that Luck was hoping to write and produce. Luck had already worked on a series of soundtracks, even winning a Golden Cine Award for best use of sound.  His musical career however had begun years earlier.

As early as 1964, Luck was playing folk music and singing protest songs, at times to very hostile crowds, at hootenannies as well as on the radio in central and southern Illinois.  By 1967, Luck was playing lead guitar in a psychedelic rock group, Coney Island Whitefish. 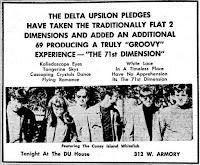 The group, which was represented by Irving Azoff and Blytham Ltd (a talent agency that handled a large number of downstate bands), performed regularly in the Champaign-Urbana area.  One memorable performance, which even got the attention of the FBI, was a large anti-war fundraiser on campus.  The group that opened the show was an up-and-coming band from Champaign called REO Speedwagon.
After the Coney Island Whitefish disbanded Luck was performing around campus as well as in Chicago at the Earl of Old Town with Cary Cohen and Ernie Mansfield as The Ensemble.

By the early 1970s Luck was increasingly focused on composing and recording music for films at the MPPC with sound wizard Tom Holman. Luck was also able to provide session work to his friends and fellow musicians. The incredible pool of talented musicians working and living in Champaign-Urbana at the time allowed for collaborations like the Golden Voice sessions. Still, despite all the talent involved, the music they created went mostly unheard. Two tracks from the session were released as a single in an effort to help launch a new record label but problems with the production and distribution of the 45 doomed its chances of reaching a wider audience. It would be over 35 years before most of the music would get any kind of release. The full story of the sessions has never been told… until now. David Luck has kindly shared his recollections of those recordings and what followed. Here is the story in his words:

At the beginning of 1971, one of the long-term projects on my plate was to write and produce a road film that would show off the State to attract tourism and investment. For me, a soundtrack showcasing Illinois musicians was a high priority. I knew some of the folks I wanted to feature were thinking about leaving the State. They included Ernie Mansfield and Elliot Delman, who were headed to France with Jim Cuomo and Mormos. Jim McNeely was soon to join NYC's jazz scene. There were also rumors that Irving Azoff, head of Blytham's talent management, was considering a move from Champaign to LA for his base of operations.

Recording the soundtrack became a top priority with no time to spare. I anticipated needing a variety of incidental music snippets for a car radio, a barrel-house scene, and open-road themes, etc. The budget wouldn't accommodate song licensing, so I contributed some of mine including “Sweet Lady James.” My goal was just to get the recordings done and put them on a shelf awaiting the film's startup of production.

Ernie transcribed, as he and I blocked out the songs. He then produced lead sheets for the five ensemble numbers. Without Ernie's lead sheets we could not have succeeded getting all that work done—especially with a group of unrehearsed musicians, who never played together as a unit. A sixth track was a solo acoustic guitar number.

Another last-minute problem was the lack of a lead vocalist. The consensus was Dan Fogelberg might be a good choice. I had never heard him sing but did associate him with The Red Herring. Tom tracked him down in Champaign, and got Danny to agree to join in.

We began on the morning of February 2, 1971, in the middle of a blizzard. The weather created delay as players trickled in from Springfield, Peoria, and Champaign. The band completed most of the basic tracks by early evening.

When Danny arrived, it was our first meeting. He straightaway said, "I love the lyrics." I thought we were off to a good start. He proceeded to lay down the lead vocal to “”Tiger.” His performance on “Tiger” may have been one of his most exuberant ever.

Before the end of the day, Danny completed his vocal overdub on “Sweet Lady James.” We listened to playback. Everyone in the studio was stunned by how good it sounded. Tom and Jerry were beaming from the control room above.

Danny, Ernie, Elliot, and I did a few hours of miscellaneous cleanup the following day with Jerry and Tom in the booth. Ernie added harmonica to “Tiger,” and we all growled at the end of the song. Elliot sang lead on “Dance Melissa Dance” because he had a girlfriend named Melissa. Danny and I did a vocal duet for “A Place to Hide.”

Finally, I laid down my guitar solo, “Joshua's Jive.” Danny came over to where I was sitting and said, "You're a better guitar player, but I know what people want." I couldn't agree with him more.

The Band That Never Was 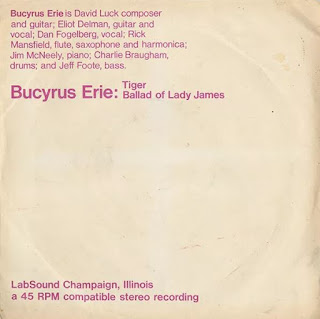 A month or so after the Golden Voice sessions, Tom decided to launch a record label called LabSound.

We decided that an umbrella name for the 'band' would be a good idea.  Cinematographer John Weir suggested a name he saw on the side of a truck: Bucyrus Erie.

The name was designed to be not only a kumbaya moment for the musicians (all credited on the record sleeve), but also to create an easier 'handle' to promote a different kind of project.
Holman was first aware there was growing interest from Columbia in building a studio in Champaign-Urbana. Civic leaders were consulting with Tom about how to best respond to the feelers from CBS. Soon RCA was also scouting C-U as a potential studio site. Holman was consulted on that project as well.
The number and quality of bands (many represented by Blytham Ltd), plus the vibrant downstate music scene, were making Champaign-Urbana attractive to the major recording companies. A successful release attracting attention from a local label could elevate the chances of being selected by one or both.
Meanwhile, Irving Azoff was pounding the pavement in LA to find a recording contract for Danny. Through Tom, he asked my permission to use the recording as a demo to showcase Danny's talents. I was happy to oblige. 'Superjock' Larry Lujack was also a big fan of Fogelberg and “Sweet Lady James.” Lujak put the song in rotation on WLS. “Sweet Lady James'' was on the air!
Unfortunately, no one could buy the record. Because LabSound hit a brick wall. Distribution was tied up by a company based in Indiana. It was basically an extortion racket, demanding thousands of free copies and thousands of free dollars. We could not afford nor were we inclined to comply with their demands. LabSound ended up producing about 200 copies of the 45.

With individual commitments and ambitions, the musicians went their separate ways.  With no record to promote, Bucyrus Erie truly was a band that never was.  Both Columbia and RCA chose to expand or build new studios in Nashville instead of Champaign.  The Motion Picture Production Center would close a few years later.  David Luck’s film was never completed.

Still, the story doesn’t end there.  Between 2007 and 2017, Luck released a trilogy of CDs, the Landscapes and Parodies series, containing music and recordings spanning four decades.

Seamlessly weaved into the impressive body of Luck’s work are most of the tracks recorded on that snowy day in 1971.

The original recordings of “Sweet Lady James,” “Tiger,” “Dance Melissa Dance” and “Place To Hide” can all be found on the 2009 release Burnin’ Stove.  “Joshua’s Lullaby” as well as another early track “Blue Fawn” can be heard on 2007’s Eddie Watches Flo.  Finally, a re-recorded version of “Sweet Lady James” with Nashville singer / songwriter Frankie Lackey was included on Yarns, Tales & Outright Lies in 2017.

The music lives on.  Perhaps David put it best:  “The Golden Voice sessions captured lightning in a bottle. Today, it provides a soundscape of what the downstate 'progressive' folk/jazz music scene was like a half century ago.”
To purchase David Luck’s music:
Eddie Watches Flo
Burnin' Stove
Yarns, Tales & Outright Lies
For more info about some of the other musicians as well as Tom Holman and the Golden Voice studio: