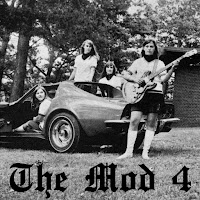 Billed as the youngest all-girl combo in the country, the Mod 4 from Aledo, Illinois were still in 8th grade when the four friends decided to form a rock & roll group in the late summer of 1966.
Alice Appleton (organ)
Nellie Hastings (lead guitar)
Barb Stutsman (bass guitar)
Kathy Talkin (drums)

In a 1969 newspaper article, guitarist Nellie Hastings told how the group got its start.  “We were sitting around one afternoon bored with our lives.  I said, ‘Let’s start a rock and roll group.’  It was a joke at first, but once we realized we could all play instruments we got so excited over the idea.   Our parents liked the idea and gave us the necessary encouragement, that’s how it happened.”
The girls indeed had the support of their parents, none more so than Kathy’s dad, Robert “Tab” Talkin, who became the band’s manager, agent, promoter, chauffeur and stage hand.
After regular practice sessions at the Talkin household, the group had developed a repertoire of a dozen or so songs.  The group’s first gig was in December of 1966 at a cafeteria dance after a high school basketball game.  Soon the group was playing other dances and local events.

In the early summer of 1967, before entering high school, the four girls went into the Fredlo Recording Studios in nearby Davenport, Iowa and recorded their first single.
A cover of Wilson Pickett’s “Midnight Hour” was sung by Kathy Talkin while the flipside featured Nellie Hastings singing a version of Bobby Goldsboro’s “See The Funny Little Clown.”  The record was released in early July of 1967. 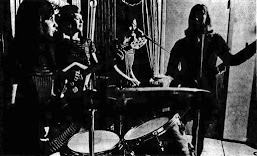 The combo continued to perform live at teen clubs, high schools, colleges and county fairs around western Illinois and eastern Iowa, though appearances were limited to a 100-mile radius during the school year.    Despite their busy schedule, the girls were all honor students in high school. 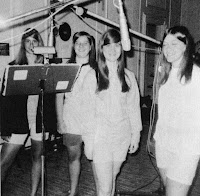 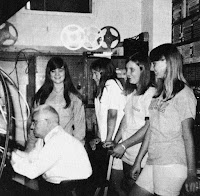 The group returned to Fredlo Recording Studios in the late spring of 1968.  This time they recorded two original tunes, both written and arranged by guitarist Nellie Hastings: "Open Up Your Mind" & "Puppet." 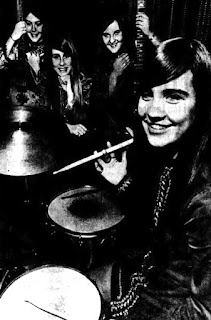 In the summer of 1968, the Mod 4 performed at the Illinois State Fair in Springfield.  (The same year as the Who and the Association.)  By 1969, the group was performing twice a week on average.  According to an article in the Quad-City Times, “the Mod 4 carry more than $9,000 worth of sound and musical equipment with them in their personal van and the girls have 10 outfit changes in their stage wardrobe.”  According to Tab Talkin their gear included “echo chambers, strobe lights and other ‘blow your mind’ equipment.”

As the Mod 4 stage show grew, so did their setlist.   In a 2004 interview with Mike Markesich for his book TeenBeat Mayhem!, Nellie mentions that at one point they had up to 57 different numbers in their repertoire. Examples include “Hang On Sloopy”, “White Rabbit”, “Good Lovin”, “For What It Is Worth”, “You Keep Me Hangin On”, “Sgt Pepper”, “Purple Haze” and “Respect.” In 1969 the group told the Quad City Times, “We play a lot of Aretha Franklin, Jimi Hendrix and the Beatles.” 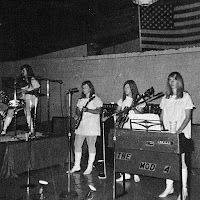 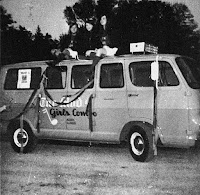 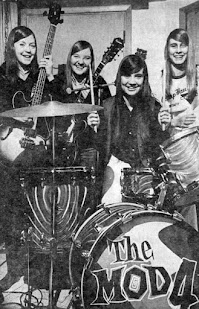 The Mod 4’s biggest performance came in early 1969 when they were selected to be on the rock variety show Happening, an ABC-TV program produced by Dick Clark and hosted by Paul Revere and the Raiders.  In January, the girls along with Kathy’s parents flew to Los Angeles for the taping.  The group lip-synced to a taped version of “Midnight Hour” which they had submitted as part of a “Battle of the Bands” portion of the show.  Because the show did tapings for the whole month in one day, the girls were able to see and meet several famous groups such as Tommy James & The Shondells, Canned Heat, Kenny Rogers & The First Edition, Gary Lewis, Keith Allison, Gary Puckett & The Union Gap as well as the hosts of the show, Mark Lindsay and Paul Revere. 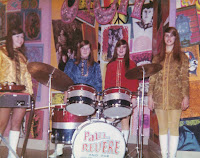 “We were thrilled to pieces when Paul Revere recognized our name and said he had heard of us when he was in the Quad-Cities for a performance last year,” Nellie told the Quad-City Times after returning home from the taping.  She added, “I only wish we could have stayed in Hollywood a while longer.  We would have met so many more groups.”
The show aired in February but unfortunately the Mod 4 did not win the contest.   Instead first prize went to a group of young kids, ages seven through 13, known as Paula & The Pipsqueaks.  As a consolation prize, the girls each received a Waltham wristwatch.  “I still have mine and it still works,” Nellie told Mike Markesich in 2004.

While in California, two talent agents showed interest in the group for a possible U.S. tour during the summer.   “We haven’t decided anything definite yet but the possibility is there.  If they can line up enough shows to make it financially beneficial for us, we’ll go,” Kathy told the Quad-City Times in January of 1969.  Obviously the tour never materialized.  The group continued to perform around western Illinois. 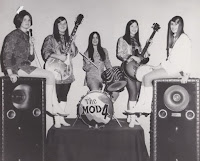 During the last year or so of the group’s existence, they were joined by a fifth member, Trisha Meacham.  By fall of 1970 however the girls were busy with their senior year of high school and the live performances began to slow down.  The group’s last gig was October 30-31,1970 at a club in Kewanee, Illinois.

After graduating high school, the four girls went their separate ways to attend different colleges.  Officially, however, the group never broke up.  They remain in contact to this day.

This post was updated on Sept 17, 2020.   An earlier version was posted on Sept 4, 2019.  Special thanks to Kathy Talkin.
at September 17, 2020
Email ThisBlogThis!Share to TwitterShare to FacebookShare to Pinterest
Labels: Artist Profiles, garage rock, Mercer County