The Nightmares on Fredlo (Quad Cities)

The Nightmares' lone record opens with a cackling announcement of LISTEN... YEAH... BABY! as the group launches into their rock-n-roll instrumental "Greyhound."  The song is three and half minutes of pounding piano coupled with primitive proto-surf guitar sounds.  On the flip side, "The Nightmare!" is an equally fantastic instrumental with spooky sound effects and menacing hoots and hollers all drenched in reverb. 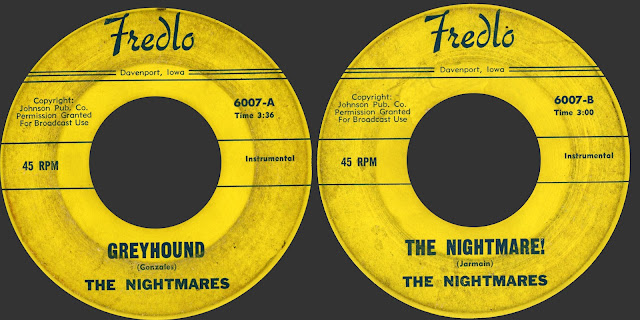 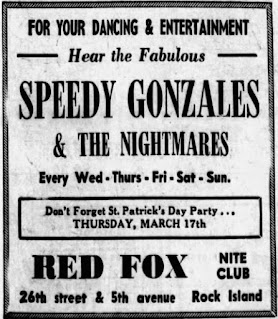 The Nightmares appear to have been, at least in part, students at the Palmer School of Chiropractic in Davenport, Iowa.  Throughout 1960 the group performed regularly as Speedy Gonzales and the Nightmares at the Red Fox Nite Club in Rock Island, Illinois.  The single (Cat# 6007) was recorded that same year at Fred and Lois Mauck's Fredlo Recording Studios in Davenport.
"Greyhound" was written by Elmer E. Gonzales of Santa Fe, New Mexico.  Elmer had been playing music, primarily fiddle, from an early age.  Prior to coming to the Quad Cities, he served in the Army Special Services where he played in the Circle A Wranglers.   As a member of that group he performed with many of the greats in country music, including Faron Young, Roy Drusky and Roger Miller.  In 1957 Elmer won first place in the "All Army Entertainment Contest."
By 1960 Elmer and his brother, Rodolph "Rudy" Gonzales, were enrolled at the Palmer School in Davenport.  Elmer graduated with his Doctorate of Chiropractic in 1961 and returned to New Mexico.
"Nightmare!" was written by Robert "Robin" Jarmain of Queens, New York.  He graduated from the Palmer School in 1963.  In 1965, after returning to New York, it appears he may have recorded a single as Robin Jarmain and Friends.
While the Nightmares did not last, both Gonzales and Jarmain went on to have long careers as chiropractors in their home states.  Fiddlin' Doc Gonzales passed away in 2017.
If you have any additional information about other members of this group or the single PLEASE get in touch at downstatesounds@gmail.com

at November 18, 2022 No comments:
Email ThisBlogThis!Share to TwitterShare to FacebookShare to Pinterest 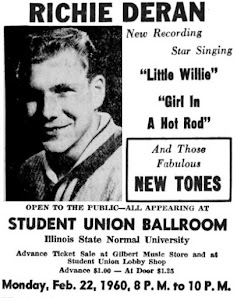 Richie Deran and the New Tones put out just one record, "Little Willie" b/w "Girl And A Hot Rod."   The single was released by the Pontiac Record Company of Canton, Illinois in late 1959.

Deran, who wrote and sang both songs, was from Burlington, Iowa.  Most of the members of the New Tones were also from the Burlington-area including Don Bowman on guitar, Larry Gustin on guitar and Bob Baldridge on drums.  The one exception was saxophone player Dave Parkinson who was from Canton, Illinois.

According to a 2012 article in the Canton Daily Ledger, the Pontiac Record Company was owned by Canton businessman Jim Aloian.  The Deran record appears to have been the label's only release. 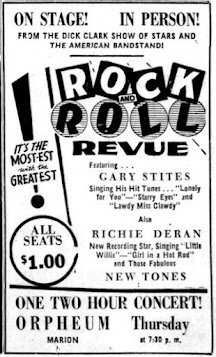 Not long after the release of the single, Deran joined Gary Stites on tour.  Stites, who was from Colorado and had recorded for the Carlton label, had performed in Burlington on New Years Eve 1959.
Together they were billed as "Rock and Roll Stars from Dick Clark's American Bandstand."  The New Tones served as the backing band for both singers on the tour.
An article written at the time mentioned that the tour would take them to 600(!) cities across the nation.  Despite the claim only a handful of dates in central and southern Illinois could be identified.
Feb 19, 1960:  Canton High School (Canton)
Feb 22, 1960:  Illinois State Normal University Ballroom (Normal)
Feb 24, 1960:  Illinois Theater (Jacksonville)
Mar 2, 1960:  Granada Theatre (Mt. Vernon)
Mar 3, 1960:  Orpheum Theater (Marion)
By April, the tour had come to a halt.  Deran continued to perform with the New Tones around Iowa over the next few years.   A 1961 article lists the members of the group as Joe Coleman on rhythm guitar and Terry Hiensly on lead guitar (both of Burlington) along with Baldridge and Parkinson.  By 1963, Warren Wunnenberg had replaced Baldridge on the drums.
Deran, whose real name was Korschgen, appears to have left his music career behind shortly afterward.  In the early 60's he opened Richard's Upholstery in Burlington which he owned and operated for more than 40 years.
As for Dave Parkinson, the group's saxophonist, his long musical journey was only just beginning in the early 1960's.   Most notably, Parkinson went on to play and record with James Brown, Bobby Byrd, Hank Ballard and others as a member of The Dapps in Cincinnati.  Back in Illinois, Parkinson would later be known as the leader of Dave and the Dynamics.
A detailed history of The Dapps that includes an interview with Parkinson can be found on the blog Zero To 180.   In it Parkinson mentioned another legendary musician from Canton, bassist Tim Drummond, who played with Brown around the same time before going on to work with Neil Young, Bob Dylan and many many others.
at November 03, 2022 No comments:
Email ThisBlogThis!Share to TwitterShare to FacebookShare to Pinterest
Labels: Artist Profiles, Record Labels
Newer Posts Older Posts Home