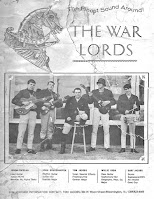 The War Lords were a 1960s rock group from Bloomington-Normal comprised of students from Illinois State University as well as two local high schools.
Jason Popelka - Lead Guitar (Junior / NCHS, Member Mu Alpha Theta)
John Schoenhofen - Rhythm Guitar (Junior / ISU, Spanish Major)
Tom Jacobs - Vocals, Special Effects (Freshman / ISU, German Major)
Willie Vrba - Bass Guitar (Sophmore / ISU, Georaphy, Phys. Ed. Major)
Gary Jacobs - Drums (Sophmore / BHS, All Around Good Guy)
The band was active from 1965 to the end of 1966 although a few of the members had been playing together even earlier.  They performed mostly as a cover band around the area.
The group did however record a single containing two original tunes.  "Real Fine Lady" and "I've Got It Bad" were both written by guitarist Jason Popelka and singer Tom Jacobs.
The single was recorded in Chicago at RCA Studios in the summer of 1966 and released on Thor Records.  According to Popelka, only about 100 copies were pressed.

Despite its obscurity, the single has found a much larger audience over the years.  Since its release, both songs have been anthologized on various garage rock compilations including the Back From The Grave series.
Mike Markesich's book TeenBeat Mayhem! lists the single as #830 in its Top 1000 Garage Songs from the USA and describes both songs as "trebly guitar punk pounders."
As for the group, they were still booking gigs as late as October of 1966 however by the end of the year they would disband when singer Tom Jacobs enlisted in the U.S. Army.
In less than two years, Jacobs would go on from being a "war lord" to a geniune war hero while serving in Vietnam as a helicopter pilot.

Tragically Thomas C. Jacobs was killed in action on September 13, 1968 while on a voluntary mission near Duc Lap, Vietnam.  His actions that day reportedly saved many lives.  He was 21 years old.
He was posthumously awarded the Silver Star, the nations' third highest military award, for "gallantry in action."  He was also awarded the Distinguished Flying Cross, the Air Medal with twelve oak clusters and Purple Heart.
_____
Special thanks to Jason Popelka for the band info and image of the 1966 poster which was created by his late father and artist, Robert Webster Popelka.  The photo was taken in front of his business, Popelka Advertising, at 1701 W. Hovey Avenue in Normal.
Both songs recorded by the War Lords have been played on past shows.  For "Real Fine Lady" listen to our Best Of Downstate Illinois Garage Rock 1965-1968 .  For "I've Got It Bad" listen to Show #35.
The War Lords are just one of many 60s groups with ties to Bloomington-Normal.  For more bands see the McLean County Discography.
at May 31, 2021
Email ThisBlogThis!Share to TwitterShare to FacebookShare to Pinterest
Labels: Artist Profiles, Bloomington-Normal, McLean County