Lothar and the Hand People (Urbana-Champaign)

In the mid-1960's it wasn’t uncommon for there to be multiple rock groups in different parts of the country that shared a band name, often unbeknownst to each other.  Spread out across the U.S. there were literally dozens of bands known as the Rogues or the Fugitives, the Changing Times or the Coachmen, just to name a few examples.

As the 60’s progressed however, groups started taking on more unique monikers.  In the psychedelic era, it seemed the more unusual and absurd the better.  Names such as the Strawberry Alarm Clock, the Chocolate Watchband, Iron Butterfly or the Electric Prunes come to mind.

Another, Lothar and the Hand People, clearly falls into this category which is what makes it all the more incredible that there were TWO bands with the name.

Both groups, independent of each other, formed at roughly the same time (Fall 1965) on college campuses halfway across the country from the other, each calling themselves Lothar and the Hand People.  How could this be?
We’ll try and explain how it might of happened but first a little bit about each band. 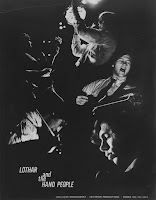 The better known of the two Lothars got their start in Denver, Colorado where several members attended the University of Denver.  The group, which formed around October 1965, consisted of John Emelin (lead singer), Kim King (lead guitar), Tom Flye (drummer), Rusty Ford (bass) and Richard Willis (rhythm guitar).   Willis was soon replaced by W.C. Wright, who in turn was replaced by Paul Conly.  Conly would play keyboards in addition to rhythm guitar.

In the summer of 1966 the band relocated to New York.  It was around then that the band’s sound began to change from a blues-based rock to a more experimental psychedelic rock.  The group eventually became known for their use of a theremin and were considered pioneers for their blending of electronics and synthesizers with rock music. The group would also jam with Jimi Hendrix and share the stage with the Grateful Dead and the Byrds.

Between 1967 and 1969, the group recorded three singles and two albums for Capitol Records.  Their most popular song being “Space Hymn” which was the title track off of their second and final LP.  The group called it quits in 1970. 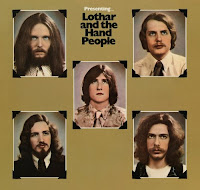 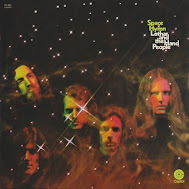 Meanwhile... back in Illinois

At almost the exact same time as the group in Denver was getting started, another Lothar was forming on the campus of the University of Illinois in Urbana-Champaign.  Initially, the group was created as an all Phi Gamma Delta fraternity band.
Jack Davis, the Illinois Lothar’s bass player, provided the following details about the groups lineup:
The original members of Lothar were: Bill Fiorio, lead guitar; Frank Eiter, drums; Rick Bach, rhythm guitar; Steve Kniss, rhythm guitar, Lee Neher, vocals; and me on bass.  Shortly afterwards Rick Bach dropped out due to grades, and Steve Kniss was let go for failure to come to practice. At that point we added Steven Kastner on rhythm guitar.

That was really the core of the group through second semester of 1965-66. At the end of the semester, Lee Neher got a draft notice and left the band. For fall semester of 1966, we decided to play as a four piece with Fiorio, Eiter, Kastner, and me.  That was the best lineup, and lasted until fall of 1967.

During their two years together the group would move beyond playing just frat parties. They performed regularly around campus at bars and clubs, including the now legendary Red Lion Inn, and once opened for the Young Rascals at the Champaign Fairgrounds.

After breaking up, several members formed another group which was briefly known as W.C. Fields before changing their name to Uncle Otto’s General Store.

Guitarist Bill Fiorio would go on to join an early lineup of REO Speedwagon before changing his stage name to Duke Tumatoe.  Over the decades, he has released several albums as Tumatoe and continues to perform today.

While the Illinois Lothar may not have had the success that the other Lothar had, bassist Jack Davis deserves credit for helping name both bands, albeit in a very circuitous manner.

The origin of the band name can also, in part, be credited to author, columnist and longtime CBS Sunday Morning correspondent, Bill Geist.   Geist, who is a native of Champaign, was a student at the University of Illinois at the time.  He and Davis were both members of the Phi Gamma Delta fraternity.
Davis explains how that unusual name came to be and how it likely travelled to Denver:

In the spring of 1965, at the apartments at Orchard Downs (where the Phi Gamma Delta fraternity was living due to a fire at the chapter house), Bill Geist and I were tossing around potential names for rock'n'roll bands. A couple of guys and I had put together a small band specifically to play for an Alpha Chi sorority exchange. Memory fails me a little here, but the two names we came up with were The Vice-Grimmick Five and Lothar and the Hand People.

Geist had the habit of calling a lot of things hand-so and so, and that's where that part of the name came from. I came up with Lothar, the sidekick of Mandrake the Magician in the Sunday funnies. It just seemed to fit. As it turned out, we used "The Vice-Grimmick Five" for the exchange, and I think we only knew about four or five songs. I was playing guitar then, Frank Eiter was on drums, Bill Schneider (a Sigma Chi) was playing bass, and Duff Schweniger was singing. If we had five people, I don't remember the missing name, but we may have had only four, which would have made the name even funnier.

That summer ('65) the drummer, Frank Eiter, who was also a Fine and Applied Arts major in industrial design, went back home to Geneva, Illinois, and played in a local band of friends. He also had decided to paint his bass drum head with the name Lothar and the Hand People. As it turned out, Frank's band was hired to play a Phi Gam fraternity rush event one night that summer. As I lived in Western Springs at the time, I attended, as did a lot of Chicago area students from Phi Gam.

As I wandered around the "rush party" that night I ran into a perspective rushee from my high school (LTHS) named Tom Flye. Tom was also a drummer and I had met him briefly when I was still a senior at LT and played in a band called the Invictas. I don't remember exactly how I knew him, but suffice it to say that we chatted for a few minutes, and then moved on.  The fact that Tom was one of the Colorado "Lothars" means that he had seen Frank's bass drum head, and, probably innocently enough, took it with him to school, probably not even knowing that that same fall semester, we were forming Lothar on campus in Champaign, as part of an all-fraternity Phi Gam band.

Davis adds, “We probably should have tried to register the name, but we were just dumb college kids with dreams of stardom.”

In Jack’s defense, I don’t think anyone could have predicted that another band would pick up on the name and claim it for their own.  At the same time, the Denver group likely had no knowledge of the Champaign group.

Other than Tom Flye, it is very possible that the other members of the Denver-based group never knew where the name came from.  In one article about the band, it claims that the name came from a friend’s dream.  In most of the press, however, the most common explanation for the unusual name was that “Lothar” was the nickname for their theremin and the band were the “Hand People.”

This explanation is undercut by the fact that the group was performing as Lothar and the Hand People before they were using a theremin on stage.  Paul Conly confirms this in an interview with It’s Psychedelic Baby, when he says, “Soon, it seemed obvious to name the theremin Lothar, because the name of the band was Lothar and the Hand People, and yet, nobody among us humans were named Lothar. So the Moog theremin was the best one to get the name of Lothar.”

Without Jack Davis connecting the dots to that chance meeting with Tom Flye in the summer of 1965, the question of how two bands arrived at such an usual band name at the same time would have likely remained a mystery.

While both groups disbanded more than 50 years ago, Sundazed Music has just released two live recordings of the Denver-based Lothar including a concert from 1966 recorded in Denver at the Exodus club.   It is a rare audio document of the band in their bluesy garage rock days.

As for the Urbana-Champaign Lothar, they never made any commercial recordings.   One informal live recording from 1967 does exist however and is housed at the Sousa Archives and Center for American Music at the University of Illinois at Urbana Champaign.
We plan to debut a track from this rare recording on the next Downstate Sounds show which will be dedicated entirely to the Urbana-Champaign music scene in the late 1960’s & early 70's.  Coming this Thursday!

For more info on the Jack Davis collection at the Sousa Archives and Center for American Music at the University of Illinois at Urbana-Champaign:  Finding Aid for Jack W Davis Papers

For more info on the Denver group:  Lothar and the Hand People