On August 1st, 1970 something big was about to happen in the Illinois Valley. At least that is what the organizers of a Canned Heat concert were hoping to convince you of. They promoted the concert as a "gigantic music festival."

Canned Heat was billed as "Stars of Woodstock & Kickapoo Creek Rock Festivals" and several ads included a picture of the traffic jam along the road to Woodstock while mentioning "10 acres of free parking" would be available. These ads, which ran in newspapers across northern and central Illinois, made it seem as though this would be an outdoor festival similar in size and scope to those earlier events. 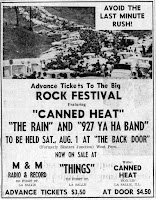 In truth, the "festival" was just an evening concert being held inside a former roller rink called The Back Door (previously known as Skaters Junction) which was located on Rt.6 at the west end of Peru, Illinois.  In addition to Canned Heat, there were just two local bands on the bill: The Rain and 927 Ya Ha Band. 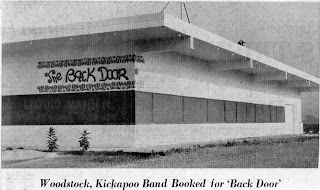 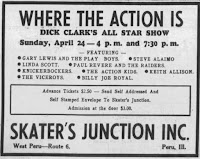 Surprisingly, the location (now Steinberg's Furniture) had hosted a couple of big name concerts just a few years earlier.  In April of 1966, when it was still Skater's Junction and under different ownership, the venue hosted Dick Clark's all star show, Where The Action Is.  On the bill was Gary Lewis and the Playboys, Paul Revere and the Raiders and several other acts.
Perhaps an even bigger performance came less than two months later when the Dave Clark Five gave two performances there on June 19th (3:00 & 7:30).

The English group, which sold over 100 million records and has since been inducted into the Rock and Roll Hall of Fame, had performed on the Ed Sullivan Show just a week before their stop in Peru.
How exactly they ended up at Skater's Junction is somewhat of a mystery.  The concert was promoted by a Peoria radio station (over an hour away) and featured three opening groups from the Peoria area: The Friars, The Shillings and The Coachmen (who replaced The Inn Group).
Whatever the reason, Skater's Junction almost certainly had to be one of the smallest venues that the Dave Clark Five would perform at on any of their American tours in the mid-1960s.  Despite that fact, it has been reported that the concert was not well attended.  If true, that should have been a warning to the organizers of the Canned Heat concert a few years later.

The promotional campaign to cast the Canned Heat concert as a "gigantic rock festival" may not have fooled any concertgoers but it was enough to put fear in the minds of city officials and some residents living on the west end of Peru.  In the weeks before the concert there were several attempts to block the event.

It didn't help the that the local papers had recently reported on the drug-use and perceived lawlessness of the Kickapoo Creek rock festival which had occurred just a few months earlier in central Illinois.  One Illinois legislator referred to that event as "a muddy and obscene haven for dope-users and flower children."

Peru citizens expressed fear that their town would be overrun by a similar crowd.    Nearby taverns and local businesses such as the Igloo Drive-In (still in business) said they would close as a precaution.

The situation took a turn for the worse when alderman William Roth referred to potential attendees as "rumdums" in a city council meeting. 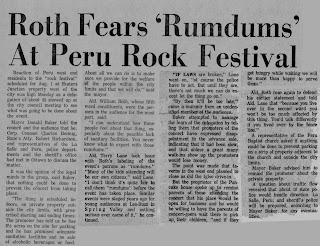 That set off a series of angry letters published in the open forum column of the local newspaper, The News Tribune: 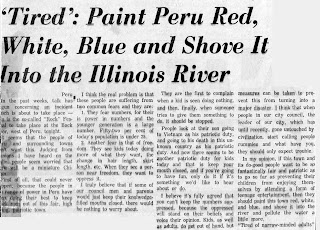 In the end, the concert could not be stopped.  It was on private property outside the city limits.

Fate had other plans however.   Just days before the concert, the organizers received a telegram from Canned Heat's management informing them that the group would have to cancel.  The telegram, which would be published in the News Tribune, read:

THIS SHALL ACT AS OFFICIAL NOTIFICATION OF CANCELLATION OF THE CANNED HEAT ENGAGEMENT TO BE PLAYED THE WEEKEND OF JULY 31 - AUG 2.  ALAN WILSON SINGER-GUITAR PLAYER OF THE GROUP HAS BEEN HOSPITALIZED FOR THE PAST TWO WEEKS FOLLOWING A SERIOUS AUTO ACCIDENT.  HE IS STILL UNABLE TO LEAVE THE HOSPITAL AND IS UNABLE TO PERFORM ANY ENGAGEMENT UNTIL FURTHER NOTICE FROM HIS DOCTOR.  A LETTER FROM HIS DOCTOR AND CANNED HEAT INC IS FORTHCOMING TO YOU.  WE ARE EXTREMELY SORRY THAT WE MUST CANCEL THIS ENGAGEMENT CORDIALLY = SKIP TAYLOR, PRESIDENT CANNED HEAT INC

Alan "Blind Owl" Wilson's auto accident was believed to be a suicide attempt.  Sadly, he would die just over a month later (September 3, 1970) from what was ruled an accidental overdose.

The concert promoters were able to salvage the event by quickly booking Poco, which featured Richard Furay and Jim Messina of Buffalo Springfield, as a replacement. An additional band, the One-Eyed Jacks from Champaign-Urbana, was also added to the bill.

Without Canned Heat however, the concert had little chance of living up to the hype.  Advanced ticket sales were already below expectations before Canned Heat had cancelled and their departure from the bill all but guaranteed a low turn out.

Still, rumors circulated that thousands of advanced tickets had been sold and that hordes of hippies were camped out west of Peru.

Come the night of the concert, several neighboring towns sent police officers and squad cars to help patrol the area.  The Illinois State Police was also out in force while several units of the LaSalle County civil defense group were put on standby. 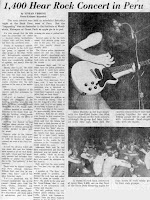 In the end, however, just 1,412 people attended the concert, mostly kids between the ages of 15-18.  The event went off without incident.

The biggest issue that the police had to deal with was the traffic of curious residents, which was bumper to bumper for miles.  It was even reported that around 200 people stood across the road from The Back Door hoping to see something happen.  They would be disappointed.

Inside however the crowd of young people enjoyed four hours of music on a hot and muggy Saturday night.

Local group 927 Ya Ha Band performed first.  Next was local group The Rain which included members Dick Verucchi, Les Lockridge, Dick Hally and John Mark Edmunds. (The group would record a single for RCA as Stronghold about a year after this concert.   Later several members would form the group Buckacre.)

The third act to perform was the One-Eyed Jacks from Champaign-Urbana.  The group had been around for several years and had gone through several lineup changes.  At the time of the Peru concert, the group was led by Mike Murphy who would go on to play with REO Speedwagon for several years.  The group had several singles including two released on Roulette Records.
Poco would close the show which lasted until midnight.  (Ironically Poco's next gig was at an actual festival, a three day event near Galena, Illinois that was scheduled that same weekend.)

According to the News Tribune, reactions of local residents to the concert ranged from "I knew everything would be okay" and "I'm glad nothing happened" to "It's a good thing the police were so well-prepared."

In the week after the concert, the paper continued to publish letters to the open forum, mostly denouncing the fear and close-mindedness that had surrounded the event. 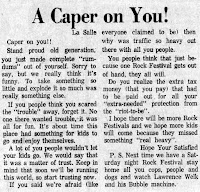 Yet one local citizen warned, "This first concert is just a front, just wait until the next one."  He or she was correct in that there were more concerts to come but none created the controversy that surrounded the first one.

Anyone that remembers the event or attended the concert is encouraged to leave a comment below.  If you want to contact me directly you can do so at:  downstatesounds@gmail.com
at September 26, 2020
Email ThisBlogThis!Share to TwitterShare to FacebookShare to Pinterest
Labels: Concerts, LaSalle County