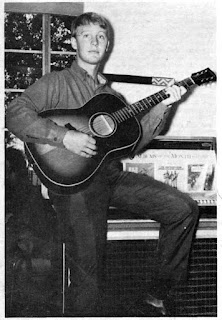 Between 1965 and 1969, Lee Rust released at least six singles of all original compositions on three different labels in three different states.  In an October 1965 article written in his college newspaper, Rust claimed to have already written 200 songs and made several television appearances in Illinois.
At the time, he was considering a tour of Illinois and Indiana or possibly recording an album in Nashville.  The article adds, "Lee is very serious about recording and writing songs and spends two hours each day on it."
Rust's recordings, made mostly during his college years, range from moody frat / garage rock and haunting teenage ballads to a pair of folky duets with his new wife.
__
Born and raised in Bloomington, Illinois, William Lee Rust first learned to play the guitar from local recording star Joe Dowell of "Wooden Heart" fame.  During his high school years, Rust's family moved to Springfield where he also took a few lessons from the leader of a local "teenage band," Chandler David's Rhythm Raiders.

Even though he attended college in Florida, Rust's first batch of recordings were made in Roger Francisco's basement studio in Urbana, Illinois.  In fact, Lee claimed to be the first person to make a record for RoFran.  This would have likely been sometime in the summer of 1965 when Lee was home from college.  In total, Rust released four singles on the label:
Do You Ever Kinda Wonder? / Scramble [P-1003] 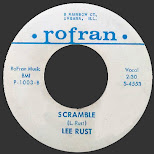 No images or audio of this single are available at this time.

Sometime after the RoFran recordings, Rust recorded two songs for the In Hoc label which was based in Birmingham, Alabama.  Exact dates unknown but possibly 1967 or '68.
These Are My Days / Nobody Will Know  [NR 401]

In 1967 Rust married Cheryl Lynn Bradley of Petersburg, Illinois.  After graduating college, the two remained in Florida for a time.  There they recorded two sides for Charles Fuller Productions of Tampa as Lee & Cheryl.  Despite the fake RCA matrix # on the label which suggests an earlier date, this single was most likely recorded and released in 1968. 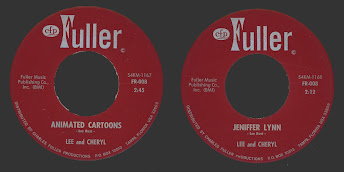 By the summer of 1969, Lee, Cheryl and their daughter Jeniffer Lynn had moved back to the Springfield area where Rust took a job working for S.A. Barker Co., one of Springfield’s best-known women’s clothing stores.

As for his musical career, there is no evidence that Lee Rust ever recorded again.