Earlier this year, drummer, singer and songwriter Keith Knudsen was posthumously inducted into the Rock & Roll Hall of Fame as a member of the Doobie Brothers.

Born in Le Mars, Iowa, Knudsen's family moved to Princeton, Illinois when Keith was in his early teens.  While a student at Princeton High School, Knudsen began his musical career playing in area bands such as the Sir-Vays and the Coachmen. 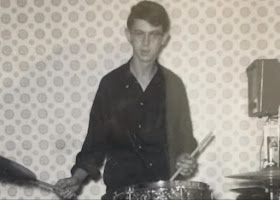 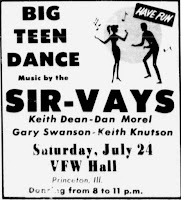 After high school Knudsen moved to California, performing with several different groups before joining the Doobie Brothers in 1974.

In early 1976, just prior to the release of the Doobie Brothers' album Takin' It To The Streets, Knudsen was back in Princeton visiting his parents and "the old home town."  The local newspaper, the News Tribune, ran the following article: 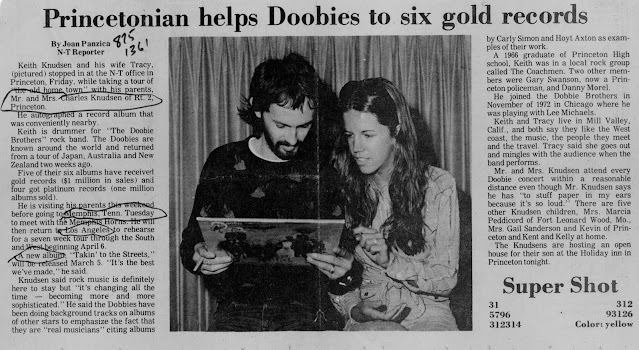 This led to the following phone interview with local radio personality Don Zukowski on March 1, 1976:

Knudsen remained with the Doobie Brothers until they disbanded in 1982.  Afterwards he formed the country rock band Southern Pacific with fellow Doobie John McFee.
Knudsen is credited with organizing a one-off Doobies' reunion in 1987 to raise money for the National Veterans Foundation which ultimately led to the group reforming.  Knudsen rejoined the group on a full time basis in 1993.
Knudsen died from pneumonia in 2005 at the age of 56.  He is buried in Princeton, Illinois.
at December 29, 2020
Email ThisBlogThis!Share to TwitterShare to FacebookShare to Pinterest
Labels: Artist Profiles, Bureau County