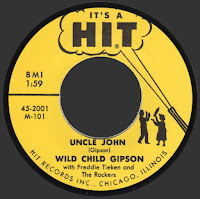 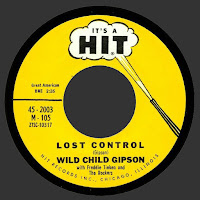 Despite Chicago, Illinois being listed on the label, Hit Records was based out of Peoria, Illinois.

By 1963, the Rockers had gone through several personnel changes.  Tieken remained but Wild Child had been replaced by Vernie Robbins on vocals and keyboards with Forrest Moore on bass and Jim Vandament on drums.   The newest member of the group was a high school student name Jack Inghram who joined Tieken on sax.

Despite his young age, Inghram also happened to own some recording equipment which the group used to record its first album By Popular Demand in the Fellowship Hall of the First Union Congregational Church in Quincy.
"The Jinx" from By Popular Demand

The album was enough of success that Inghram and Tieken decided to move the recording equipment into Tieken's basement and start IT Studios as well as a companion record label:

Between 1963 and 1968, IT Studios produced approximately 20 singles and LPs released mostly on IT Records (*exceptions noted below) from artists and performers originating from Illinois, Iowa and Missouri.