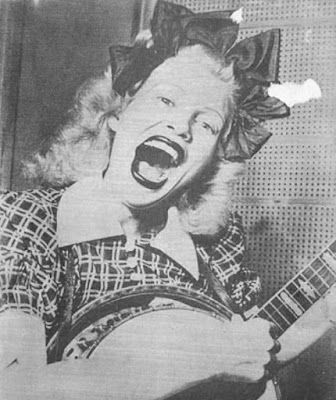 On Thursday March 14th the Downstate Sounds radio show will dedicate the hour to the life and music of Cynthia May Carver better known as Cousin Emmy.

The banjo-strummin' balladeer and radio star was born in Kentucky in 1903 however around the age of 13 her family moved to Bloomington and it was in central Illinois that she began her career as a performer.

On the show we will hear a variety of her recordings including live performances and early radio broadcasts.  In addition, Bill Kemp from the McLean County Museum of History will be our guest to talk more about Cousin Emmy's connection to the area.  Join us on Thursday from 8-9 pm on WESN 88.1 FM in Bloomington or stream the archived show:  HERE.

Below is Bill Kemp's excellent article on Cousin Emmy first published in the Pantagraph 3/10/19:


Cousin Emmy, a pioneering female country music artist affectionately known as “the first hillbilly to own a Cadillac,” spent a decade or more in Bloomington just as her national career was taking full flight.

It was here in Central Illinois where she honed her already formidable musical talents and began developing her own colorful stage persona. By the mid-1930s and the Great Depression, banjo pickin’, guitar strummin,’ fiddle playin’ singer-songwriter Cousin Emmy was known to radio listeners across much of the U.S. and Canada.

Born in 1903 in south-central Kentucky, Cynthia May Carver came from a large sharecropping family, the second youngest of seven children. As with most “hillbilly” performers during the golden age of radio’s many barn dance programs, Cousin Emmy played up her hardscrabble roots—both real and imagined.

“I was raised in a log cabin with cracks so big you could throw a cat through it and never touch a hair!” she would say. “I started strippin’ ‘tobakker’ when I was eight, I reckon.” Her schooling, it was said, lasted but two weeks, and she learned to read by studying mail order catalogs.

May’s (as Cynthia was known) family was intimately steeped in the vernacular musical styles of Appalachia and the wider region; her father Henry being a well-regarded fiddler and her mother Molly a banjo player.

Sometime around 1917, Henry and Molly Carver divorced, with Molly taking daughters May and Pearl and her four sons to Bloomington. One older son, Hazie, remained in Kentucky only to flee the state after shooting a man. He was then killed in Iowa during a poker game.

Pearl, the oldest child, came to McLean County already married, and she and her first husband Guy Houchens farmed for a time in Old Town Township east of Bloomington. She eventually remarried and died in the Twin Cities in 1982 at the age of 89.

In Bloomington, Molly Carver kept food on the table by working as a housekeeper and whatnot, while the boys became farm laborers and construction workers. Moss Carver, the youngest child, ended up working in the local cement finishing and contracting business. He remained in Bloomington for the rest of his life, passing away in 1980.

Meanwhile, by the mid-1920s, youngest daughter May and her brother Burton began performing around the Twin Cities and Central Illinois. Appearing as “Joy White,” her musical repertoire eventually included some fifteen or more instruments, including the banjo, guitar, fiddle, piano, accordion, saxophone, harmonica, ukulele, jaw-harp and musical saw.

Country music as we know it today developed in the 1920s and 1930s through the then-novel and utterly transformative mass communication medium of radio. Accordingly, in 1927 or 1928, May and her brother Burton began appearing on WMBD AM 1470 in Peoria. Burton Carver, though, didn’t take to show business like his sister, and soon May was left to forge her own independent career.

Sometime in the mid-1930s, May Carver assumed the stage name Cousin Emmy. At the time, she appeared regularly on WHAS in Louisville with Frankie More’s Log Cabin Boys. Two years later, May Carver began performing with her own band—Cousin Emmy and Her Kin Folks (later spelled “Kinfolks” as one word.)

By 1943 she was headlining a daily (except Sundays) early morning program on 50,000-watt KMOX out of St. Louis. In early December of that year, Time magazine profiled the rising star in its radio column. “Cousin Emmy is a slightly faded blonde of about 30 with a voice like a locomotive whistle and a heart of gold,” read the profile. “She has a broad bony face, a wide mouth, lots of platinum-colored hair, immense enthusiasm, and masterly capacity for mugging.” She dressed the part too, wearing checked, gingham and plaid dresses, topped off with a big bow in her hair.

Unlike many of her contemporary Appalachian balladeers who favored haunting melodies and tragic narratives, Cousin Emmy was best known for her “comedy rube act” and “brassy and even outrageous personality.” Her performances included stunts like pulling a harmonica out of her cleavage. “Aint’ no tellin’ what I’ll pull out next,” she would say. She also played musical numbers on a rubber glove fitted with a nozzle and a hole in the middle finger.

That’s not to say she couldn’t rattle the church rafters with a poignant rendition of “Graveyard” or other more traditional songs rooted in Old Testament suffering and New Testament redemption.

Time magazine described Cousin Emmy as a “teetotaling, nonsmoking, unprofane Baptist.” Well, we know from her later visits to Bloomington, she drank and smoked, though as to her profanity or lack thereof, we cannot say!

Publicly, Cousin Emmy maintained that she was a committed single gal. “I ain’t got time to do no courtin,’” she would say. Yet we now know, thanks to recent research by Hunter Randolph, a student assistant with the University of North Carolina’s Southern Folklife Collection, that she was married at least twice, perhaps three times, with one divorce coming in 1949 to a St. Clair County (Ill.) farmer.

During the folk revival of the 1960s, Cousin Emmy and many country music performers were rescued from relative obscurity by younger musicians and fans seeking the hipster holy grail of authenticity. She appeared on Pete Seeger’s “Rainbow Quest” folk music TV program, for example, and recorded an album with the New Lost City Ramblers.

Cousin Emmy also played a tangential role in one of the seminal moments in rock and roll history. On July 25, 1965, at the Newport (R.I.) Folk Festival, Bob Dylan “went electric” for part of his set, eliciting boos from purists in the crowd. And who preceded Dylan on stage? Why, none other than Cousin Emmy!

In February 1973, she performed at Illinois State University as part of the New Friends of Old Times Music series in what was likely her last public performance in the Twin Cities.

Although rooted in the rich musical traditions of the Bluegrass State, Cousin Emmy also claimed the Land of Lincoln as a place close to her heart. “The nicest people around, and I’ve been all over the world entertaining—well, I always did say Illinois was a fine state.  The best in the union,” she said during a 1965 visit to Bloomington. “I lived here when I was younger, you know.”