The Chessmen were an R&B / soul group from Decatur, Illinois that was active from 1962 to 1966.  During this time the group performed regularly throughout the state and released two singles on their own Riot-Chous Records ( 3205 Meadow Lane, Decatur, Ill. ) :

The only other known release on the Riot-Chous label was a single by Joe Meriweather.  It is likely that the Chessmen were the backing band on the single. 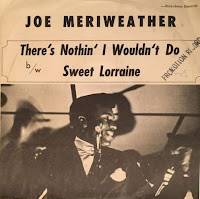 Prior to this release Meriweather sang and recorded with Preston Jackson & the Rhythm Aces.  The group released singles on Vee-Jay and Hit Records (reissued on Hermitage).
Here is a rare TV performance circa 1966 of Joe Meriweather and the Chessmen on Marty's Dance Party (a live teen dance show hosted by Marty Roberts which aired on WTVP - Decatur and WICS - Springfield):

Music by the Chessmen and Joe Meriweather will be featured on the January 10th episode of the Downstate Sounds radio show.
at January 05, 2019
Email ThisBlogThis!Share to TwitterShare to FacebookShare to Pinterest
Labels: Artist Profiles, Decatur, Record Labels, soul & funk